Each month we'll give away a free delivery to a randomly selected new visitor (valued at $115). 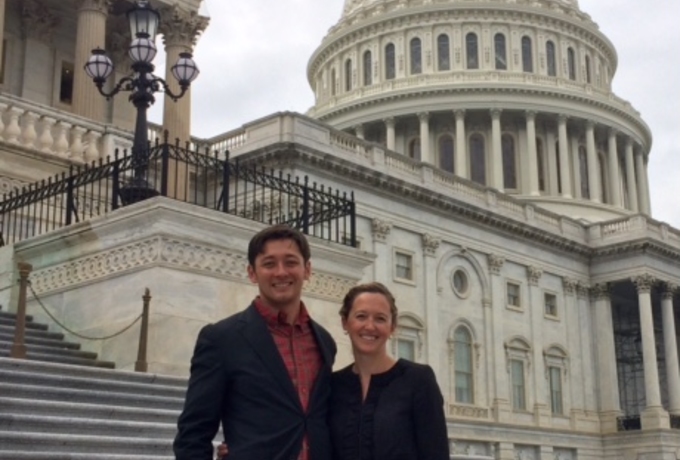 October is national sustainable seafood month. “Sustainable Seafood” has become a blanket term that carries a vague, yet assuring promise that what you are eating does not hurt the ocean. From inside the world of sustainable seafood, it’s a complex, often contentious set of interwoven issues that require the dynamic adaptability set by the ocean, changes in market behavior, and constant innovation.

This week the White House is honoring 12 people from around the country who are deeply embedded in this world. From Bun Lai, the wildly creative sustainable sushi chef who avoids unsustainable sushi staples like shrimp and tuna, and instead serves invasive species, to Monica Jain, founder of Fish 2.0, who connects investors and innovators in the seafood world, and Linda Behnken, a long liner from Sitka, Alaska, who helps keep the fishery viable both financially and ecologically for generations to come. As well, Alan Lovewell, founder of the community supported fishery, Real Good Fish, and the Bay2Tray program, is also receiving an award today. All of the people gathered are committed to finding solutions that may have started small, but hopefully are part of an upwelling of sustainability that will grow and grow. The event will be live streamed on the White House website at www.whitehouse.gov/live at 1 p.m ET on Friday, Oct. 7. Follow the conversation at #WHChamps.

Robin Alden is the founding Executive Director of Penobscot East Resource Center, Maine’s center for coastal fisheries in Stonington, Maine. She led a path-breaking effort to bring shared management to Maine’s lobster fishery, now recognized internationally as a model for sustainable fisheries. Robin is the former Commissioner of the Maine Department of Marine Resources, responsible for Maine‘s marine and anadromous fishery management and enforcement and for aquaculture in the state. She was also the publisher and editor of both Commercial Fisheries News and Fish Farming News and a public member of the New England Fishery Management Council.

Linda Behnken is Executive Director of the Alaska Longline Fishermen’s Association, which represents longline fishermen in securing sustainable access to healthy halibut, sablefish and rockfish stocks. Linda was a commercial fisherman for 34 years and served on the North Pacific Fishery Management Council. During that time, she also served as an industry advisor to the North Pacific Anadromous Fish Commission, the National Academy of Science Individual Fishing Quota Review Panel, and co-chaired the Council's Essential Fish Habitat committee. Linda participated in the last two re-authorizations of the Magnuson-Stevens Act and was an active advocate for the Sustainable Fisheries Act amendments. She is also a founding member of the Alaska Sustainable Fisheries Trust, which is a cutting-edge financing tool to help new and young break into Alaska’s fisheries and connect communities with their natural resources.

Chris Brown serves as President of the Seafood Harvesters of America and spends around 200 days per year aboard his fishing vessel the Proud Mary. The Seafood Harvesters represent commercial fishermen from the Bering Sea to the Gulf of Mexico and north to New England. Under Chris's leadership the Harvesters champion accountability, stewardship and sustainability in fishing practices, fisheries science and fisheries management. Chris also heads up the University of Rhode Island's East Farm Fisheries Center, serves as President of the Rhode Island Commercial Fishermen's Association and is the founder and executive director of the Rhode Island Fluke Conservation Cooperative.

Jason DeLaCruz is the President of Wild Seafood Co., which provides high quality sustainable fish to eco-minded customers. He is also the Executive Director of Gulf Wild, a company dedicated to setting the standard for genuine, responsibly caught, traceable and reliable wild domestic seafood, and the Vice President of the Gulf of Mexico Reef Fish Shareholders’ Alliance, a strategic non-profit fishermen’s organization that is working to protect the Gulf’s fish and fishermen for today and for future generations. He is a former commercial fisherman and lives in Florida with his wife Vicky.

Byron Encalade is President of the Louisiana Oysterman Association. He engages in harvesting seafood, oysters and shrimp and in transporting seafood along the gulf coast states. He is currently serving as Plaquemines Parish, Louisiana Constable 3rd Ward, and as an American Legion Post 430 Judge Advocate. Byron is also a voting member on the Louisiana Department of Wildlife & Fisheries Oyster task force. He is President of South Plaquemines United Fisheries Cooperative. Byron has been a leader in his community by pushing for the sustainable management of oyster grounds. He has been a staunch supporter of a recent Sustainable Oyster Shellstock model for sustainable oyster management.

Monica Jain is the founding director of Fish 2.0, a social enterprise that brings entrepreneurs and investors together to grow the sustainable seafood sector. Fish 2.0 works with businesses developing technologies or processes that reduce waste in seafood supply chains and create value-added products from waste. Fish 2.0 is also working with land-based aquaculture ventures that operate sustainably and provide a new source of jobs and local seafood. Monica is also the Executive Director at Manta Consulting, which works to bring structure, knowledge and substance to initiatives around sustainable resource use, and previously worked for the David and Lucile Packard Foundation, The Nature Conservancy, The Ocean Conservancy, and the Monterey Bay Aquarium Seafood Watch Program.

Bun Lai is the owner and chef of Miya’s Sushi, the world’s first sustainable sushi restaurant. Miya’s also offers the world’s only invasive species menu, featuring dishes made of foraged ingredients that are threatening to the region’s indigenous species. Bun is an avid diver and fisherman who supplies his own restaurant with local, sustainable seafood from his own hundred acres of shell-fishing grounds off of the Thimble Islands in Connecticut. He is also the owner of two fishing boats which serve as laboratories for sustainable seafood production. Central to the Miya’s menu are culturally and commercially unpopular types of seafood that are abundantly locally available such as silver sides, sea robins, and wild seaweeds. Bun Lai is the recipient of the prestigious 2011 Seafood Ambassador Award from Monterey Bay Aquarium for his leadership in the Sustainable Seafood movement. He is a Seafood Watch Ambassador and previously worked as a Director of Cooking and Nutrition for an NGO working with low income pre-diabetics.

Alan Lovewell is the CEO and Co-founder of Real Good Fish, a community-supported fishery that connects local fishermen with local consumers with weekly deliveries of high-quality, local, sustainable seafood. Real Good Fish’s new program, Bay2Tray, brings local seafood to public school children through their school lunch program, and brings local fishermen into their classroom to engage in experience-based learning around ocean health. Previously, Alan was a Sea Grant Fellow working with NOAA on their ecosystem based management initiative. Having grown up on the water, has devoted himself to serving coastal communities and is passionate about the relationships between business, community and environment, with specific interest in sustainable food systems.

Dr. Kevan Main has been a Senior Scientist at Mote Marine Laboratory since 2001. She also serves as the Director of Mote’s 200-acre aquaculture research field station. Dr. Main and her team are developing sustainable ways to produce marine and freshwater fishes and invertebrates for food and to restore declining fisheries. In 2014, Dr. Main created a model Marine Aquaponics System to sustainably produce local seafood for local communities. Before joining the science staff at Mote, Dr. Main worked in the American Pacific Islands and numerous countries throughout Asia to expand the US aquaculture industry. Dr. Main was the first director of the USDA regional aquaculture center, which is in Hawaii – the Center for Tropical and Subtropical Aquaculture. She served as President of the World Aquaculture Society in 2012-2013 and was inducted as a Fellow of the World Aquaculture Society in 2016. Dr. Main received her Ph.D. from Florida State University where she studied shrimp and fish behavior in seagrass meadows in the northern Gulf of Mexico.

Luka Mossman is part of the Conservation International Hawaii program, where he serves as the Fisheries Outreach Coordinator. The Hawaii program works to merge traditional knowledge with Western science, conservation tools and strategies for changing how people and business value local, sustainable seafood. Luka is a native Hawaiian born from Hilo, Hawaii. Through his experience in working with the Lokoi’a o Hale-o-lono (traditional Hawaiian fishpond aquaculture), he has come to understand what it takes to manage a small and delicate fishery resource. Although he spent most of his life in the ocean as a fisherman, a spearfisherman, a surfer, and a fishpond steward, he also has significant experience in working with native Hawaiian forests, as they play a key role in the island ecosystem.

Brad Pettinger is the director of the Oregon Trawl Commission, a state commodity commission operating under the Oregon Department of Agriculture's Commodity Commission program. He has worked collaboratively in the Pacific Fishery Management Council process to improve the management of west coast groundfish fisheries. Under Brad's leadership, all three Oregon trawl fisheries have been certified by the Marine Stewardship Council as well-managed and sustainable fisheries. Brad currently owns a trawler that participates in the west coast trawl groundfish catch share program off the coast of northern California and southern Oregon. Brad’s work has been instrumental to recovery of many rockfish species, which will provide sustainable, healthy, delicious seafood for local communities.

Richard B. Robins, Jr. is the owner of Bernie's Conchs, LLC and Ocean Perfect Seafoods, Inc. He also served as Chairman of the Mid-Atlantic Fishery Management Council from 2008 through August of 2016, where he led the Council through a historic stakeholder-driven visioning and strategic planning process for the management of marine fisheries. Under Rick’s leadership, the Council also completed an amendment to establish a nearly 38,000 square-mile area, named for the late Senator Frank R. Lautenberg, in which deep sea corals will be protected from the impacts of fishing gear. Rick was also previously an associate member of the Virginia Marine Resources Commission.