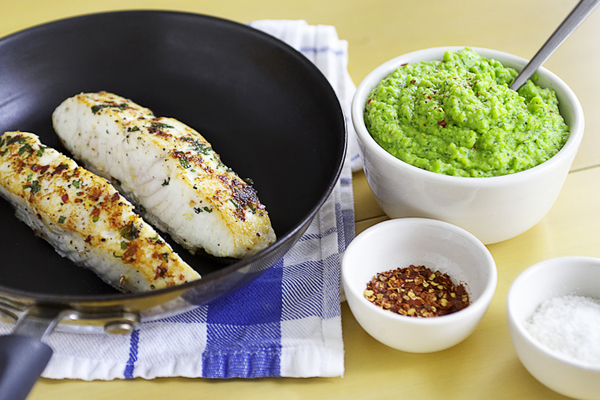 Salt and pepper to taste

For the halibut, sprinkle the fillets with lemon zest, red pepper flakes, and mint. Let chill for 30 minutes while you prepare the puree. Remove from the refrigerator and season with salt and pepper.

Heat the olive oil in a large nonstick skillet until nearly smoking.

Place the halibut filets carefully in the pan. Let cook for 3 to 4 minutes or until golden brown and then flip.

Reduce heat to medium and let cook for an additional 2 to 2 minutes or until opaque, and beginning to flake.

Remove to a plate to let sit for a few minutes before serving. For the fava-bean purée, bring a medium pot of lightly salted water to boil. Prepare a bowl of ice water and set near the pot. Boil the fava beans for 5 minutes or until the white skins are beginning to split.

Using a slotted spoon, removed to the ice water to cool. Remove to a bowl. Slip off the white skins and discard. Meanwhile, add the peas to the pot of boiling water. Cook for 2 to 3 minutes or until bright green and floating on the top of the water.

Using a slotted spoon, remove to the ice water. When cool, drain and place in a bowl. Place the blanched favas and peas in the bowl of a food processor. Add the lemon zest and juice, mint, and red pepper flakes and pulse several times to combine. Add the olive oil in a steady stream, pulsing steadily to combine. Process until the mixture is combined, but still slightly chunky. Season to taste with salt and pepper. Remove to a bowl. To serve: Place a large dollop of pea-fava purée in the center of four plates. Place a piece of seared halibut over the puree and season with a squeeze of lemon, a sprinkling of chopped mint leaves, and a drizzle of olive oil. Serve with a bowl of course sea salt for seasoning.

WINE PAIRING: This would be delicious with a crisp, dry minerally white wine such as a Picpoul de Pinet from the Languedoc or a pale, dry rosé from Provence.

via The Yellow Table