Each month we'll give away a free delivery to a randomly selected new visitor. 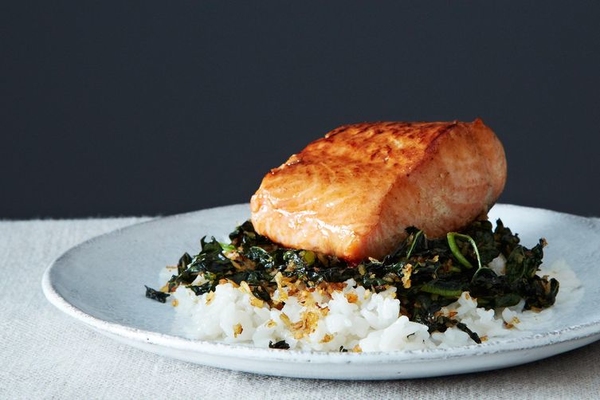 Rinse rice in cold water and drain. Place in a saucepan with coconut milk, water, and salt. Bring to a boil and stir. Reduce to the lowest heat, cover, and cook for 15 minutes. Remove from heat and let stand 10 minutes, or until ready to serve (it will stay warm for up to an hour).

While the rice is cooking, heat oven to 400°F. In a lidded jar, combine the melted coconut oil, sesame oil, coconut aminos, and Sriracha. Seal the jar and shake vigorously until emulsified.

Place the sweet potatoes on a baking sheet. Drizzle with a tablespoon of melted coconut oil and sprinkle with paprika. Toss to coat. Bake for 30 minutes or until tender.

Place kale and coconut flakes on a baking sheet. Drizzle with about â…” of the dressing. Toss until well coated.

Drizzle salmon with 1 to 2 tablespoons of the remaining dressing. Bake the salmon and coconut kale mixture during the last 15 minutes of the sweet potato's baking time, or until cooked through, being careful not to let the kale burn.

Remove sweet potatoes, salmon, and kale from oven. Serve over fluffed rice with an extra drizzle of dressing.